The 2009 display of the annual Perseid meteor shower which peaked on or around August 12th (The "Glorious 12th!") were flagged in advance to be more spectacular than normal due to a "filament" in the dusty trail of Comet Swift-Tuttle being likely to cross our planet's orbit.

For quite some time I have been "observing" meteor trails by way of monitoring reflections of the signals from distant TV stations in "VHF Band I", which straddles the amateur allocation at 50MHz.

To observe these phenomena my favoured signal source was that from the now defunct Norwegian NRK1 TV transmitter near Bagn on channel E3 (55.25MHz).  The 1200km distance from me of this transmitter is about ideal for reception by meteor trail reflections.

That year my observations started on Saturday 8th August and I detected what I took to be the start of a build up of meteor activity, and at that point I began to record the traces from the various computer programs I use for this activity.

I also streamed some of the software displays onto the internet so that others could watch my received signals live, or nearly live anyway!

R_Meteor trace 1 - Spectacular Bursts from Norway, and a slight "detour" to monitor the GB3LER Shetland beacon

R_Meteor trace 2 - Spectacular Bursts, including a spell of what is probably Es (Sporadic-E)

Spectran trace 2 - The Es event above at 1406 - observe the sidebands +/- 50Hz - the intensity of the signal also suggests Es propagation. 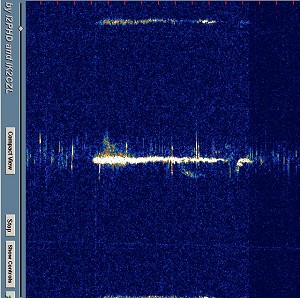 Notes on the software used

There are a number of programs I find useful for this activity, all of which are effectively audio spectrum analysers in one form or other:-

Argo, a simplified version of Spectran

Although this page was originally written about the 2009 Perseids, a most interesting shower, the "Draconids" occurred on October 8th 2011 at at time when I was able to set my gear up to record it.

I used the Ostrava TV transmitter in the Czech Republic as a signal sournce on 49.76MHz (channel R1) as the Norwegian TV at Bagn has since disappeared from Band I due to the switchover to digital TV.

The Ostrava TV will also soon meet that same fate, so I figured this may be the last opportunity to use European TV transmitters for this purpose.

Thankfully the shower was a good one and the accompanying screen grab from my R_Meteor program appears to illustrate the shower peaking just after 2000 UTC. You will notice that the stream of meteors is so fruitful that it is quite difficult to be absolutely sure.

A note about the receiving equipment in use during the above events. Surprisingly modest :-  Yaesu FT-897D transceiver (fitted with VCXO as standard, and therefore extremely frequency-stable over the long periods required.) Antenna is a simple nest of dipoles in my roof space.

The more eagle-eyed of you may have spotted that the frequency stability of the receiver used for the Draconid shower wasn't quite as good as for the Perseid shower - that is because for the Draconids I was using my Yaesu FT-920 which isn't fitted with a TCXO (nice rig though all the same!)

I run my web streaming software from time to time, primarily for the benefit of the users of digital SSTV on the 80m band, but when I am not active in this mode I often monitor one or other of my favourite meteor trail reflection sources and stream video from that activity instead.   The live stream is mostly there during evenings and weekends.

There are many of these, but here are a couple of my favourites :-

G7IZU Radio Reflections by Andy Smith, an extremely comprehensive site dedicated to meteor trail reception modes, and a springboard to many other fascinating sites.

Radio Reflections from Bangor, Northern Ireland :- a highly dynamic site of special interest to me as Richard, the site owner lives on exactly the same line of latitude as myself.